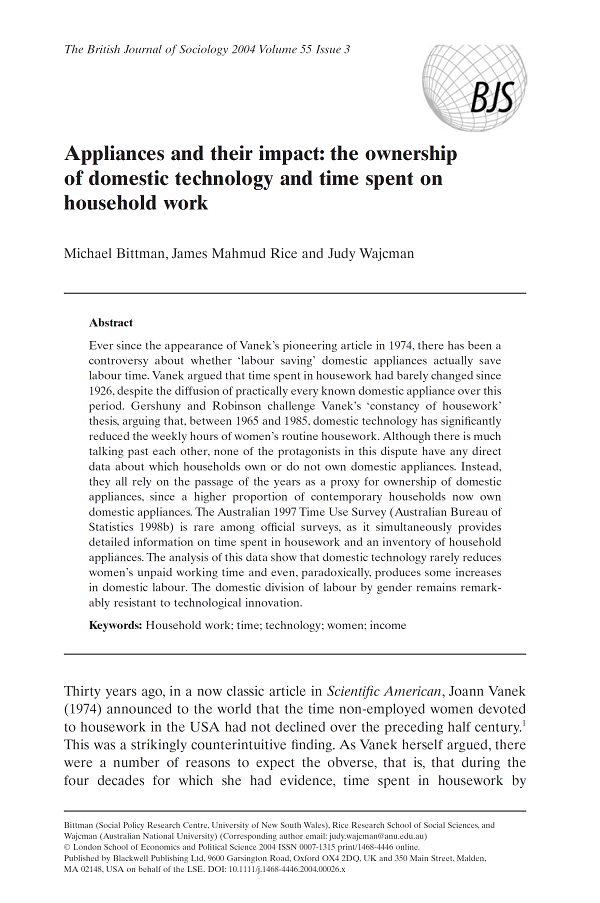 Appliances And Their Impact: The Ownership Of Domestic Technology And Time Spent On Household Work

Ever since the appearance of Vanek's pioneering article in 1974, there has been a controversy about whether "labour saving" domestic appliances actually save labour time. Vanek argued that time spent in housework had barely changed since 1926, despite the diffusion of practically every known domestic appliance over this period. Gershuny and Robinson challenge Vanek's "constancy of housework" thesis, arguing that, between 1965 and 1985, domestic technology has significantly reduced the weekly hours of women's routine housework. Although there is much talking past each other, none of the protagonists in this dispute have any direct data about which households own or do not own domestic appliances. Instead, they all rely on the passage of the years as a proxy for ownership of domestic appliances, since a higher proportion of contemporary households now own domestic appliances. The Australian 1997 Time Use Survey (Australian Bureau Of Statistics 1998b) is rare among official surveys, as it simultaneously provides detailed information on time spent in housework and an inventory of household appliances. The analysis of this data shows that domestic technology rarely reduces women's unpaid working time and even, paradoxically, produces some increases in domestic labour. The domestic division of labour by gender remains remarkably resistant to technological innovation.