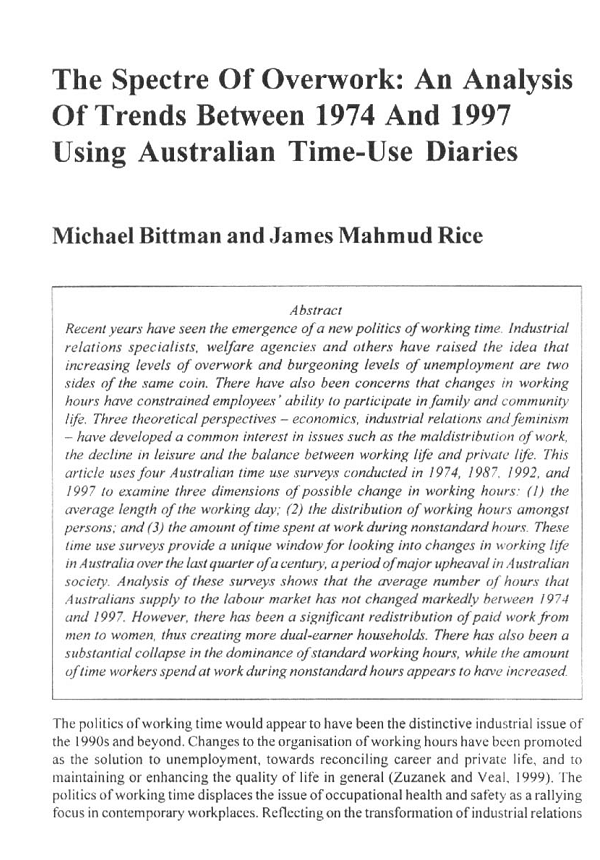 The Spectre Of Overwork: An Analysis Of Trends Between 1974 And 1997 Using Australian Time-Use Diaries

Recent years have seen the emergence of a new politics of working time. Industrial relations specialists, welfare agencies and others have raised the idea that increasing levels of overwork and burgeoning levels of unemployment are two sides of the same coin. There have also been concerns that changes in working hours have constrained employees' ability to participate in family and community life. Three theoretical perspectives - economics, industrial relations and feminism - have developed a common interest in issues such as the maldistribution of work, the decline in leisure and the balance between working life and private life. This article uses four Australian time use surveys conducted in 1974, 1987, 1992, and 1997 to examine three dimensions of possible change in working hours: (1) the average length of the working day; (2) the distribution of working hours amongst persons; and (3) the amount of time spent at work during nonstandard hours. These time use surveys provide a unique window for looking into changes in working life in Australia over the last quarter of a century, a period of major upheaval in Australian society. Analysis of these surveys shows that the average number of hours that Australians supply to the labour market has not changed markedly between 1974 and 1997. However, there has been a significant redistribution of paid work from men to women, thus creating more dual-earner households. There has also been a substantial collapse in the dominance of standard working hours, while the amount of time workers spend at work during nonstandard hours appears to have increased.